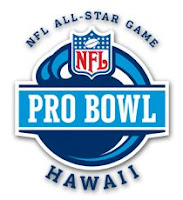 I had written a post not so long ago about the 2009 Pro Bowl, and had mentioned that it was undecided where the 2010 Pro Bowl would be held. Well, it's now confirmed that Hawaii will no longer be the host; in fact in 2010 the Pro Bowl game will be played the week before the Super Bowl in Miami, Florida. This is a big disappointment to those who attend the Pro Bowl in Hawaii every year, not to mention the players who get to take a break in the Islands. Another cause for concern is the local economy; In 2007 the Pro Bowl attracted 25,000 visitors, who spent approximately $28 million during their stay, according to the Hawaiian Tourism Authority. In an unstable economy that's a lot of money to be sent somewhere else. However, the move to Miami for the Pro Bowl is not permanent, and let's hope that it makes its way back to Hawaii for 2011.

If you are heading to Hawaii for the Pro Bowl this February but still haven't purchased your tickets, click here.
Posted by Natalie Malloy